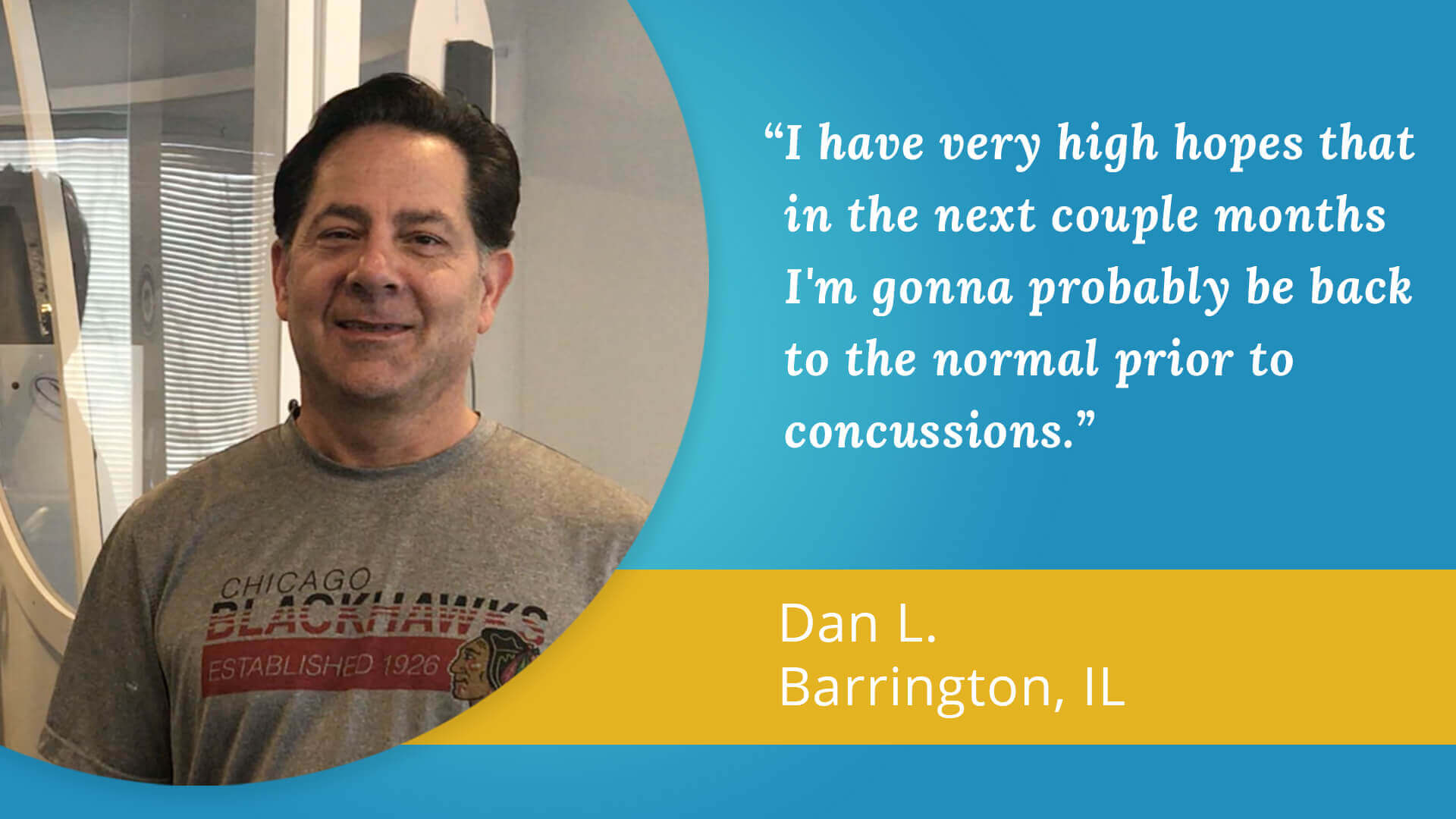 [Lori] And Dan, what brought you in to The Functional Neurology Center?

A couple concussions over the last three years, and we don’t know how many in between or prior to, but general not improving, overall fog, lethargic, no motivation, almost got to the point of calling my HR and actually saying I need a couple weeks off from work. And my chiropractor down in Illinois had gone to school with Dr Schmoe and said “You should check out this place.” So I did and even though it’s travel to get here, and a lot to do five days in a row, I can’t say enough about how the change from Monday ’til today, Friday has made a difference.

[Lori] This is excellent. How did you get your concussions?

I play hockey and, Blackhawks. But not with the Blackhawks, obviously. But I play at a high pretty level with men’s league, so just playing two to four times a week, and one skate my feet got taken out from under me along the boards and I landed on the back of my head. And that was three years ago this January, and the neurologist at the time did typical, oh, you know, did all the testing and a CAT scan, there’s no bleeding, nothing like that, and then he said, “Take a few weeks off “and then start to exercise, see how you feel, “and then gradually you can go back to playing hockey.” I mean that, you tell a hockey player that and you’re gonna do it immediately, there’s gonna be no hesitation. So I started doing that and then I would play once, I’d feel okay, then I’d play again and for the next three days I would be kind of out of it, you know, right back.

Then I would take more time off and that pattern went on for almost nine months, and it gradually, I did get better and I continued to play, but I can distinctly, now that I look back on it after doing this therapy, my level of play wasn’t the same, my energy level wasn’t there, but I just kind of got used to this new normal and I think you hear that a lot with people with concussions that you come to a new normal sensation and fast forward to just this last summer, I’m sure my head was getting bumped in between there in the last year and a half, two years, and then I was playing again this summer, and a young son of one of my friends who we play with plays out in an East Coast school, big, strong, kid, fast, lightning speed compared to most old guys, and I beat him to the puck but he skated through and literally ran into my head, basically, from the front side this time. And I continued playing, it didn’t feel that bad, I just got bumped, knocked down by Pete.

But literally the next few days I really felt that I had something, then I skated one more time, which was probably stupid, and I just got a soft bump to my jaw, like I barely could feel it, but immediately felt the effects of the concussion to where I was actually, for the first time, slurring some words. So that’s when I went, whoa, threw up my hands and I said, “I’m taking three to six months off” and that was great, and I felt like I was getting better, I went to another neurologist who, a little better than the first one, sent me to vestibular therapy, which definitely is better but wasn’t enough. I was getting nauseous with it. And then I started to get better, I thought I could start skating again come December and we had a big, heavy snow and I did two and a half hours of snow blowing with a Toro snowblower, two stroke, lots of noise, even though I was wearing headphones and the next three days I felt like it was right after the first concussion, I mean, it was just like back in time and then you go into depression about it, lethargy, everything came back, and I’m like, what? Do I go back to square one?

And that’s when I found Minnesota Functional Neurology and I said, “I’m coming up here to deal with this.” And these guys have corrected my eyes, now they’re tracking together, they were off, my head was off, everything was off, basically that you don’t know and now that I’ve learned, your head, you brain is fighting your eyes tracking things on a different level, so by getting them corrected together it helps the brain re-circuit itself, basically so that you can go back to being normal and feeling normal. And I have very high hopes that in the next couple months I’m gonna probably be back to the normal prior to concussions.

[Lori] Fantastic. Dan, it’s been a pleasure having you in. Thanks for sharing your story with us.