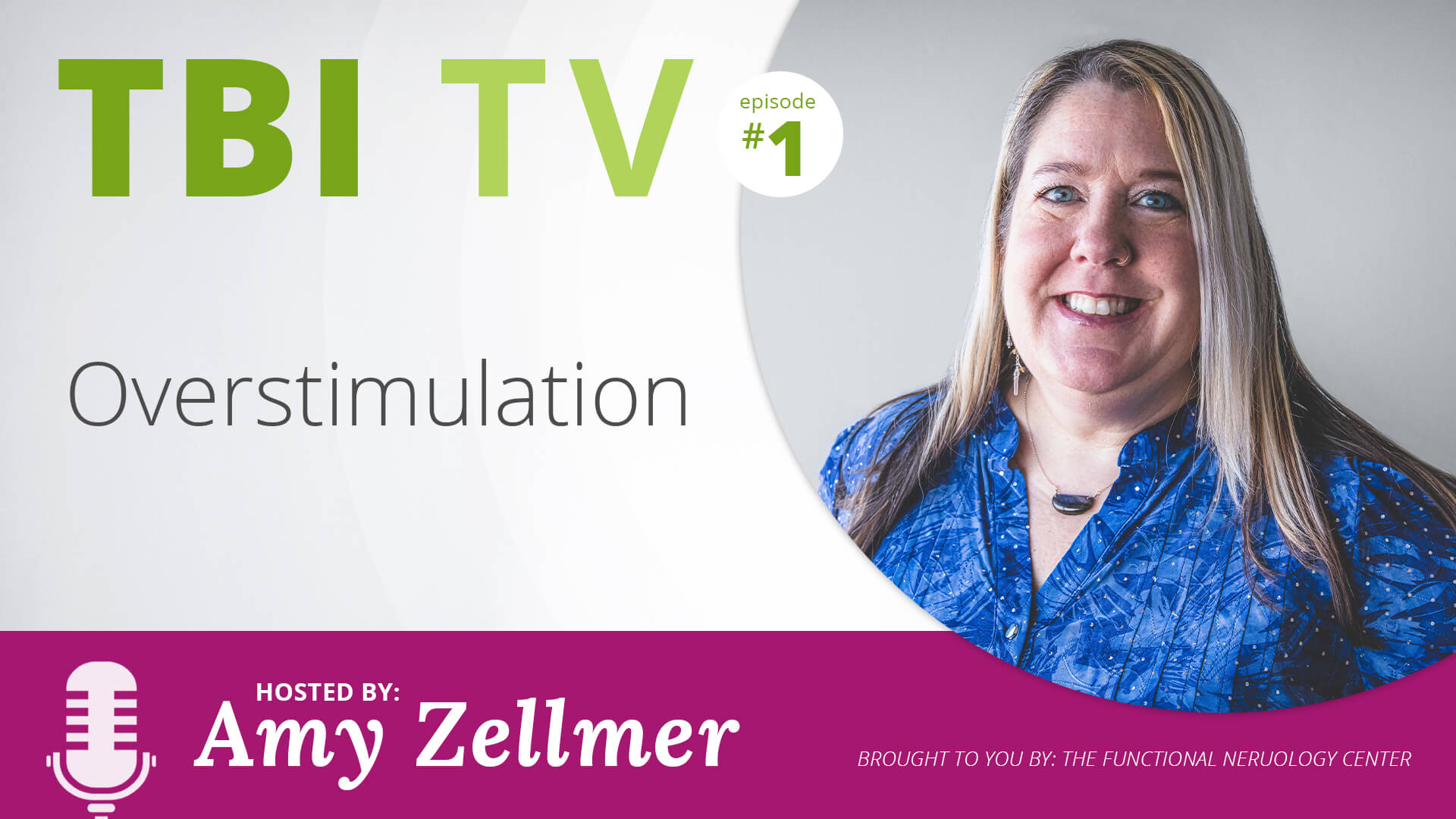 Hi everyone. Welcome to Traumatic Brain Injury (TBI) TB, brought to you by *Minnesota functional neurology (*MFNC is now The Functional Neurology Center.) . I’m Amy Zelmer and today we are talking about overstimulation. So if you’ve experienced a concussion or any sort of brain injury, you’ve probably dealt with overstimulation. If you haven’t, yay. But I will help explain it to you so you maybe understand or maybe you’re a caretaker or a healthcare professional watching. And hopefully this video will help you understand what overstimulation is and why. We sometimes seem like we’re isolating ourselves. So I like to give the example of going up to eat at Applebee’s. They typically have, you know, the fluorescent lighting. They have TVs like on every single wall on different channels. They have music playing. Plus you have everybody in the building eating and talking and clanking their glasses and their silverware. And when you have a brain injury, your brain, it, you know, it’s kinda like when you drop a computer and the, and the hard drive isn’t working quite right.

The electronics of your laptop aren’t working and your brain doesn’t quite know how to filter out all the noises. Um, you know, it’s something we take for granted before a brain injury. Um, and so afterwards it’s like your brain doesn’t quite understand how to filter out the background noise. And so you might hear the person five tables over cutting their food and clinking their plate. And that might be all you can hear and it drives you crazy. Or the light itself might just be like too much. And even if you have your hat on or you have your sunglasses on, it might just still be too much and be triggering some other stuff for you. So overstimulation is when all of your senses are being worked and your brain doesn’t quite know how to process all of it. So, you know, you’ve got your smells, you’ve got your sounds, you’ve got your sites, you’ve got, you know, you might have your taste going, your touch. Um, and so when you get over, stimulate it, you shut down. And I can tell with them when I’m with other brain injury people and like the, thier face just goes blank and they quit talking and they just said that. And I can tell right away that they’re overstimulated.

For me, what’s really hard is when I’m out to eat with several people, if it’s just one on one, it’s not so bad for me anymore. Um, I can usually deal with the background noise on this. It’s really obnoxious. Um, but if I’m with a group of people and I’m talking to someone here and these two are talking to each other next to me, it’s really hard for my brain to understand which conversation to listen to and it can really, really wear me down and tire me out. Um, and so sometimes when I go out to eat with a group of people, I know that’s about all I’m going to do for the day because I’ll be done by the end of that conversation. But it’s important to understand that we’re not just tuning out because we’re bored, we’re tuning out because we can’t process what you’re saying to us or what’s going on.

All we can hear is the blender at the bar making someone’s margarita. It’s like, it’s so frustrating. And I recently traveled with, with one of my TBI friends and whenever we go out to eat, cause she kept forgetting her ear, um, her earplugs. Um, so she would actually use a napkin and crumple it up and put it in her ear, which I thought was a pretty, pretty brilliant, um, improvise in the situation. But you’ll notice a lot of range of people do wear, you know, um, earplugs or even the litter, um, headphones. Um, they’ll have hat on the other sunglasses on and it’s not all there. We’re trying to be rude is that we’re trying to self protect because our brain isn’t functioning like a normal person’s brain. And so it takes a lot more work for us to listen to that conversation and try and keep track and follow.

And I know early on in my conversation there was times we’d go out to eat and I’d look at my friend and be like, w we have to get our food to go. And we’d get it boxed up and leave because I just, I couldn’t handle it anymore. So fortunately for me, um, through some of my vestibular rehabilitation and my, I, my, um, vision therapy and everything that I’ve done with Dr. Schmoe, um, it’s really helped resolve a lot of that overstimulation, but it still exists. Um, I’m definitely not exempt from it. And certain things definitely trigger it worse than others. Like I said, eating with a group of people, it can be really hard for me. So overstimulation is a challenge and you know, if you’ve gone back to work, um, that might be a really big problem that you’re dealing with. You know, if you essentially feed your cubicle situation and you can hear the people on their phones or talking to other people and maybe you’ve got a fluorescent light above you and we hear the, um, the vent system humming, like when the AC is on, you know, like people, but before brain injury, when your brain processes correctly, it’s just second nature.

We don’t have to think about processing, but after brain injury, the processing system isn’t working correctly. And so we’re very easily overstimulated. And that’s also why oftentimes we don’t like to go out to eat. We don’t like to go to parties. We don’t like to go to family gatherings because we know we’re going to be overstimulated. Um, and it’s not that we don’t want to see our friends and family, it’s just sometimes it’s really, really hard. And sometimes we have to make the decision, okay, if we’re going to do this, if we’re going to go to a family gathering, I’m going to be in bed for two days afterwards. And that’s our reality. And it’s hard and it’s really hard to make some of those decisions. And people stop inviting you. You know, like after you say no a couple times, they just don’t even ask anymore. And honestly, I’d rather be asked and have the option to say yes or no because I have good days and I have bad days and I, my good day, I might be willing to make the sacrifice and I can go to a party. So anyway, that’s my 2 cents on overstimulation and I will see you guys again next time.