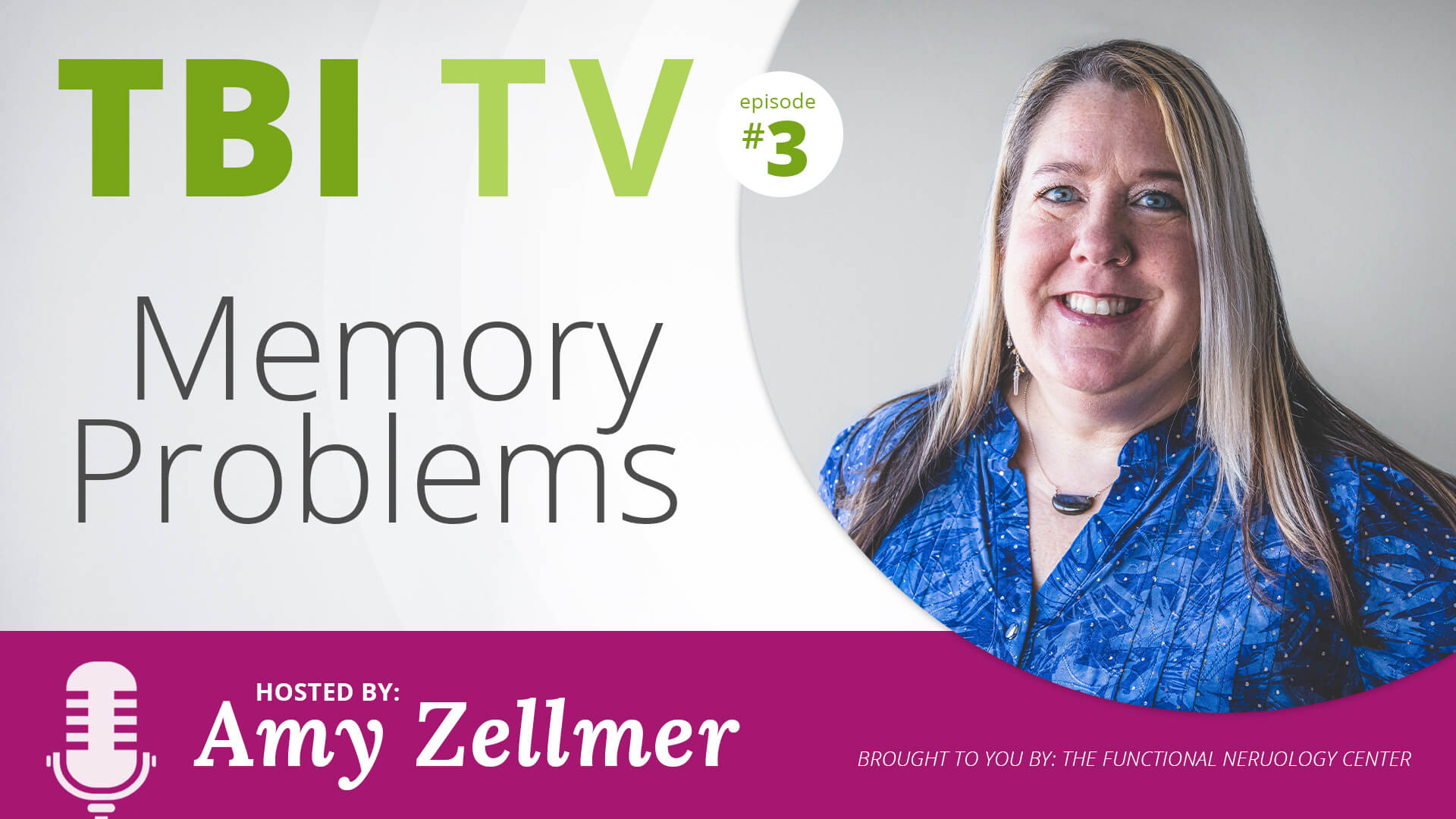 Hi everyone. You are watching Traumatic Brain Injury (TBI) TV brought to you by *Minnesota functional neurology (*MFNC is now The Functional Neurology Center.). I’m Amy Zomer and today we are talking about memory. So if you’ve experienced a traumatic brain injury or an acquired brain injury, you understand the memory challenges that can come afterwards. And it’s really challenging because in my situation, my short term working memory was like gone non-existent. Um, and I’m a photographer and so I was trying to run my own business and the memory caused significant problems in trying to run my business. Um, I would, I’d read an email in my head, I responded back to it, but I would never actually respond to it or do anything with it. And then like a few days later they’d be like, Hey, did you ever get my email? And it was really confusing to me. Like, yeah, I didn’t, I respond to that. Um, or I would pull up my calendar to put the appointment in the calendar and by the time the calendar was pulled up, I would forget what I was even doing.

I mean, it was like that fast that the memory was gone. And I remember scheduling. So say I had a session scheduled for 11 o’clock I would have a reminder for 30 minutes before, 15 minutes before 10 and five minutes before, so half hour before the alarm goes off. Oh that’s right. I have a session coming in today. Quarter to, Oh I guess I better go get the room ready, get it prepared for my session, 10 minutes to, Oh gosh, I better go put some clothes on. I’m still in my pajamas five minutes to, okay, someone’s going to be knocking on my door soon and then knock, knock, the person would be there. And sometimes I was still confused why there was a knock at my door. I mean it was just like gone like a black hole. And even in the morning I would get up and look at my schedule for the day and be like, okay, 11 o’clock I have a session and 1230 I have to leave for a doctor’s appointment.

And then like I said, I’d have all these alerts on my calendar cause I just, I couldn’t remember. I’d be sitting at my desk and then half hour alert would go off and I’d be like, Oh, I have a session today. Even though I already read it twice that morning. I mean it’s just like poof, gone. I would get up, so okay. Laundry my, my office and then my laundry and then my bathroom. So I would get up and go to the bathroom and be like, Oh that’s right. I have to rotate my laundry. I’d go to the bathroom, go back, sit down on my desk and forget that the laundry ever existed. And I know some of you watching might be going well I do too. No, no, this would go on for days. By the time I remembered the laundry was in there, I’d have to rewash it cause it was already smelly, like you know.

And then I also had people say like, Oh, I forget things too. You know, it’s just brain farts are just getting old. It’s hormonal. It was menopause. Like people throw all these excuses out at you and it’s like, no, it’s brain injury. Like I remember what it was like before brain injury. To have those like brain farts where you’d walk in a room and be like, what did I come in here for? Or you would get up and go to the bathroom and sit back down at your desk and five minutes later I go, Oh, I forgot the laundry. You know, but that’s not this. It’s gone. Never to be thought of again unless something triggers it. Like an alert on my phone. Right. So eventually I learned to put the laundry basket in front of because my laundry is just in like a closet.

So I eventually learned to put the basket in front of the closet. So I literally had to trip over it. And that was a trigger. Oh, that’s right. There’s laundry in there. I have to rotate it. And I mean I would pull up Google or I pull up my calendar or pull up a website and by the time it loaded and I’m on like high speed internet, by the time it loaded, I have forgotten what I was even pulling it up for. I mean, it’s just gone. And I would write lists for the grocery store, put it inside my purse. Cause if I forgot my list I was screwed. But then I’d have to put a post, a note up, sigh of my purse. This does go to the grocery store. Cause otherwise I wouldn’t even remember to go to the grocery store. There was a time more than one time, but I was driving home from target, the same target.

I go to all the time familiar, it’s the same robe, the same neighborhood and I’m driving and all of a sudden I’m like, am I? And it was so frightening. And I remember pulling over, pulling up my GPS, looking at it and going, okay, I’m on the right road. I’m where I should be. I’m going the right way. But it was just so concerning to me that I would have this complete lapse of like, where am I had no rec rec recollection of where I was. And it was so, it was really, really scary. And you know like pulling up Google and not remembering what I was actually going to Google, it’s scary. It’s not just frustrating. It’s incredibly frustrating, but it’s scary because you’re like, Oh my God, what is wrong with my brain? Why can’t I remember things? And, and like I used to be a brilliant multitasker.

I could do tons of things. I could remember things, no problem. Like I had my credit card numbers memorized, I had my friends phone numbers memorized, I had my driver’s license number memorized. I mean, who even memorizes that? But I had no trouble. I could, I could hold an entire grocery list inside my head and now forget it. And you know, I’m three and a half years out and I sometimes think that I can remember and thought go, the car should start and I need five things I need, you know, blah blah blah blah and blah. And I get to the grocery store and like, what was the fifth thing? You know? And it’s so frustrating. So I’m all about lists. I’m all about to do lists and early on a to do list. If it happened to like get tucked under another piece of paper or if I set something on top of it, I wouldn’t even remember how to, to do list.

And I know that seems completely nonsensical cause like why wouldn’t you think you have a to do list when your brain doesn’t work? Right? You don’t remember that you have that to do list. Like it has to be out on top of the desk where I will see it. And I also have a big whiteboard in my kitchen where I, where I put down, you know, the three things I have to do today because if it’s out of sight, I don’t even think to look for it. Even though I’m, you know, like in theory, I know I have five things I need to do today, but if they’re not at where I see him, I won’t even think about it. I’ll just, you know, go make a bowl of cereal and sit down and watch stranger things. Um, you know, it’s just, it’s incredibly frustrating and it’s also very alarming and scary. And, you know, I think some people even have it worse than I do. And I would have to think that in those situations it’s really frightening. And you know, oftentimes people will be like, come on, why can’t you remember? Oh my God, why did you forget that? Like, I can’t believe you forgot to bring the chips.

You have no idea. It’s just, it’s so frustrating when people are like condescending and look down at us for not being able to remember something and it’s not our fault. It’s our brain injury. And you know, that’s why I’ve created this series of videos to try and help people understand and, you know, let you survivors know you’re not alone in this journey and help caregivers and loved ones understand and hopefully healthcare professionals are watching as well. Um, to get kind of a firsthand glimpse into what we go through. So I hope you guys have enjoyed today’s lesson and a memory and I’ll see you next time.