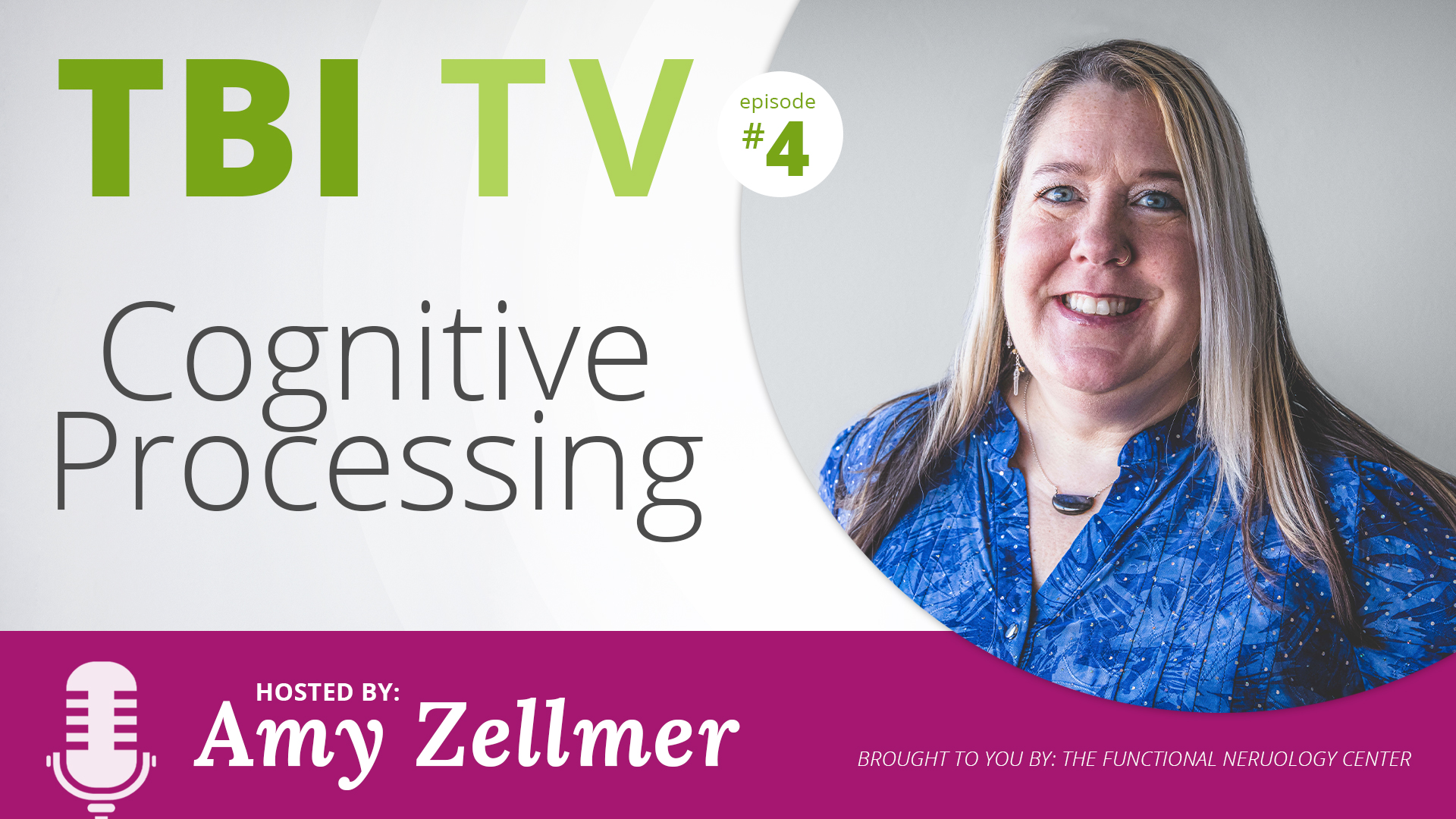 You are watching Traumatic Brain Injury (TBI) TV brought to you by *Minnesota functional neurology (*MFNC is now The Functional Neurology Center.) I am Amy Zellmer and today we’re going to be talking about cognitive processing speed. So when I first fell, I really didn’t understand what was wrong with me. Um, I knew right away I wasn’t okay. The second I got up I had excruciating pain. I had visual problems, I was seeing stars and my peripheral vision and I just knew I wasn’t okay, but I didn’t really know the depth of how not okay I want. And so the next day after my injury, I went to the bank to use the ATM and I took my card out and I stared at the ATM and I knew that I needed to do something with my card, but I didn’t know what I needed to do. And after a few minutes of kind of staring at it, I just gave up and went home.

Um, and then at home I had an interesting experience where I went to heat something up in the microwave and I just stared at the microwave and I’m like, there’s so many buttons. I don’t know what button to push. And it took me a really long time to figure out how to use the microwave. And then my oven, I have like a digitalized oven and that was way even more complicated for me. And what I’ve later understood is that it was my cognitive processing, like the processing, the processor was damaged when it landed on the asphalt. And so like my brain just couldn’t quite process the information that it was seeing. And um, I uh, another example is I went to the gas station and when you pay at the pump, um, it asks you like 101 questions sometimes. So it almost always asks you for your zip code and if you want a car wash, that kind of thing.

Um, but the one I was at was asking me a ton of questions and then it was like press enter to continue. And there wasn’t a button that actually said enter. And in hindsight, I understand that there was a green button and the green button was meant to be enter, but I couldn’t make that connection. And that’s what was going on with my oven, my oven when I started to, to um, set the temperature, it says press start and my oven doesn’t actually have a start button. It has an enter button. And so like my brain couldn’t, like, it just couldn’t understand it was looking for a button that there and that took around. I still am, I’m really, really tired. Um, I still have trouble remembering how to use my oven and my microwave and I know that that’s like crazy for people with our brain injury to understand.

And as a person with a brain injury, it’s like super crazy. Um, that gas station I was at that I couldn’t figure out the buttons. I literally got back in my car and drove to a different gas station because I just, I, I couldn’t figure it out. I, I like started crying cause I couldn’t figure it out. So I got my car and literally drove across the street to the other gas station. And that one made more sense to me. Um, you know, anything with like a touch screen I struggled with. Um, my phone was never really a problem. I didn’t have a lot of trouble with my phone, I think cause I knew how to use that. Um, but like at the doctor’s office they have this new check-in system where like you have to do this touch screen thing. And I was like, it was so confusing and overwhelming for me.

And a really funny story as I went to the neurologist office, this was about two or three months after I fell. And they have this really fancy coffee machine. It like you pick what kind of coffee you want and then it freshly grinds it and then it bruise and into this cup and it adds the cream and sugar if you want it. And so there’s like a big sticker that says with an arrow that says push this button first. But then that’s all the further instruction that they really put on there. And so I pushed the button and then I’m like, I don’t understand why you do. And fortunately there was some other person that was waiting to use it and she helped me. She was like, Oh you push this. And then this and then this. And I was just like, this isn’t the neurologist office.

Like I just thought the irony was just hysterical in that that I couldn’t figure out how to use the coffee machine in the normal ship’s office. Um, so the cognitive processing, um, was challenging and I later came to understand how cognitive processing and memory kinda tied together, um, cause if your cognitive processing’s delayed that that causes, you know, like it’s not going to stick into your memory. And so, um, one doctor explained to me how and, and so the other component, the cognitive processing, the memory and then that feeling like you have add all of a sudden, um, I felt like I couldn’t focus on anything. I couldn’t concentrate. Someone would be talking to me and I’d be going, Oh, Hey, look at that shiny thing over there. And it was crazy frustrating and it was frustrating the person talking to me too. And I totally understood that, but I didn’t know what to do, how to handle it.

And so it was later explained to me. So your cognitive processing is like super slowed down. It’s like, you know, you’ve got your five speeds and you’re normally running at five and now you’re running at like two. And so if someone’s talking to you in that sentence, you’re still processing the first sentence that they’re telling you while they’re on like the third or fourth sentence. So now you’ve just completely lost interest in the conversation cause you can’t keep track of it and then that’s preventing it from going into your memory as well because you’re just not being able to focus on it. So cognitive processing, um, has been a really big challenge. Um, it’s definitely gotten better for me. Um, I’m three and a half years out and it’s definitely gotten better. But you know, when I’m tired all my symptoms flare up and it definitely, um, the touch strips, touchscreen stuff will still show its ugly face to me once in a while. Um, but I understand it now and I know better how to cope with it. So anyway, thank you all for watching and thank you all for such great feedback. I have been getting on the Traumatic Brain Injury Traumatic Brain Injury TV series. I really appreciate all your feedback and your shares, your likes, your comments, you know, continue sharing these videos. And the more awareness we can bring, you know, helps other survivors understand what they’re going through, and we can help healthcare professionals understand what we’re going through. So thanks for watching everyone.