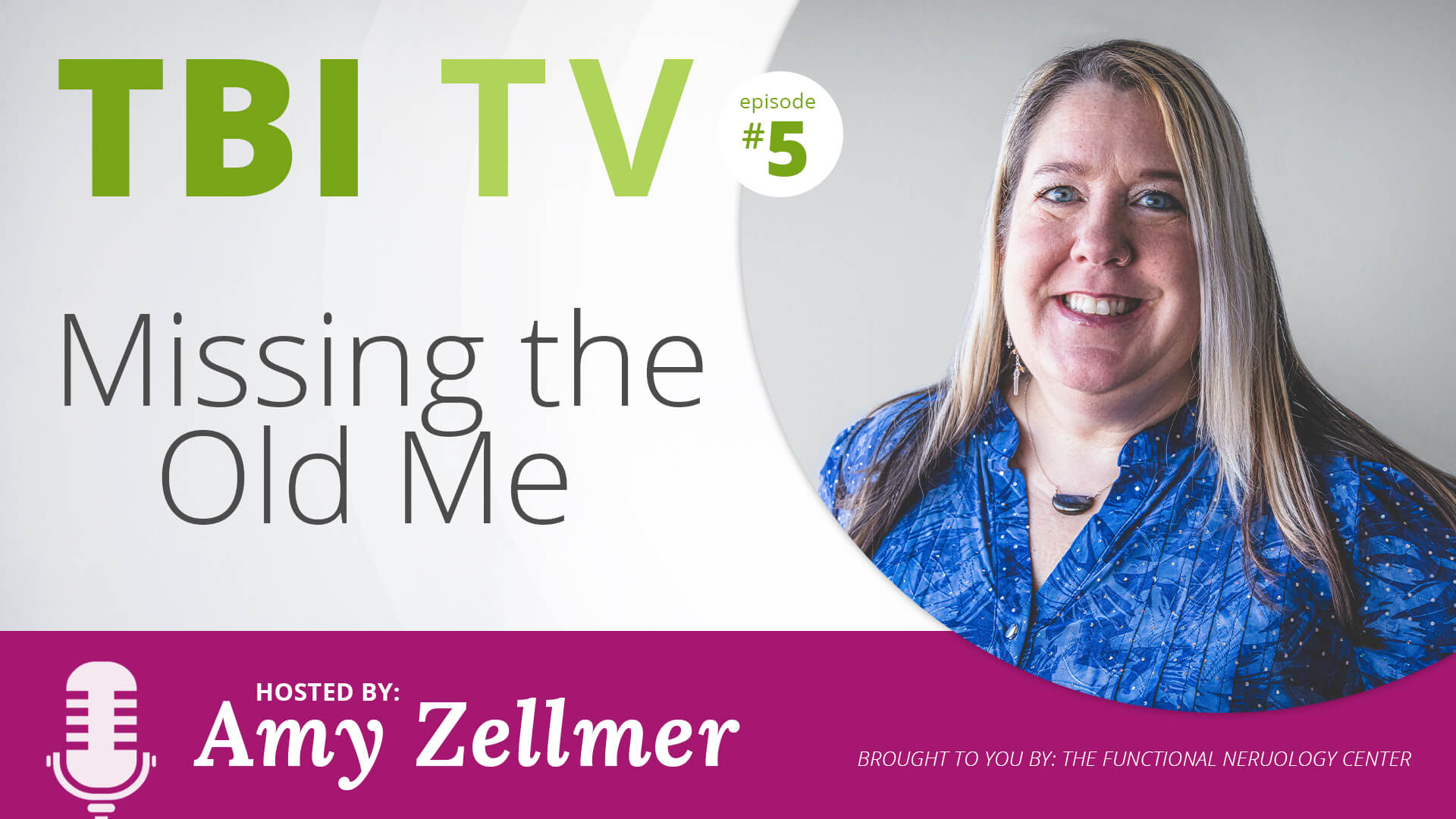 Hi everyone. Welcome to Traumatic Brain Injury (TBI) TB, brought to you by *Minnesota functional neurology (*MFNC is now The Functional Neurology Center.) I am Amy Zelmer. And today we’re talking about missing the old me. Now what does that mean? You might be asking if you’re not a brain injury survivor missing the old me is part of the grieving process. And I think the strangest thing about this whole journey is the fact that I can vividly remember the Amy that I used to be and I know all the things I used to be able to do but I can’t do now and, and, and who I am, not now. And it’s such a surreal experience. You know, like I know what I used to be able to do. I was the queen of matte multitasking. I had an internal GPS. I mean my friends were always amazed at how I could get us somewhere in a strange city.

I’ve never been before, just based on my spidey senses, GPS. And now that’s definitely one of my, my weaknesses. Like I get confused and turned around in a S in a, in a complete square shaped mall. Um, it’s kinda ridiculous and my friends make fun of me now that I get lost everywhere we go. And, you know, I used to be able to memorize things so well, like I’m one of those weird people that had all my credit card numbers memorized and my driver’s license number memorized. Now it’s like I’m lucky if I can remember a phone number, like look at a phone number on my iPhone and then like input it to call it. Like I’m lucky if I can remember long enough. Usually I have to click between the two screens to get that number. But, you know, and it’s not just like the things we’re able to do, it’s how we feel too.

Like, you know, the constant neuro fatigue and the constant exhaustion and the headaches and the chronic pain. Um, you know, it’s just all of these things that just make us feel like we’re a complete stranger to ourself. You know, a lot of us have apathy, um, you know, which is a lack of motivation. Um, like we just, we don’t care. We just, we have no desire to get up and do something. And that’s not depression, that’s not noncompliance. Um, that has apathy and it’s a very real thing. And for me, I still have my moments where I experienced that. And you know, I’m four, almost four years out, I’m just coming up on my anniversary and I still experience a lot of these things. They’ve gotten so much better. It’s, you know, it’s further and further and fewer between, but they still happen for me.

And I can very, very vividly remember the feelings when I was going through all of this. The first two years were hell. I mean, there’s just no other way to explain it. There was just a constant hell inside my head and you know, knowing exactly who we used to be, you know, it’s not like we forgotten things. I mean, like our short term memory is often disrupted and that’s frustrating as well. But our longterm memories for most of us are still intact. And so we very much know who we were and we knew what our old limits were and we knew what we could do and we knew how we felt. And you know, maybe we, we slept eight hours a night. Some of you may have only slept like six hours a night, but I was a pretty consistent eight to nine hours a night sleeper.

And now if I don’t get like 10 or 11 hours of sleep, I just feel like crap in the morning. And you know, it’s so frustrating because it’s like we get up in the morning and we’re used to like getting up and go right, have your cup of coffee and you’re ready to go out the door and get on with your day. And now it’s like you get up, you feel like a turtle or slaw off and like you just kind of move through the motions. You know, you take a shower and then you got to lay down on the bed for a few minutes to get up the strength to put your clothes on. And I am not exaggerating and I know those of you who know what I mean, you’re kind of laughing because it’s true and you, you know, if you can’t laugh at it, it makes it more challenging.

So, so you just have to have a sense of humor about all this stuff. But missing the old me is such a real thing. And I hear people talk about it all the time and actually I just saw someone writing about it in the tribe today and that’s kind of what prompted me. I’m like, that’s the next topic I need to talk about. I have a list this long a topics to talk about. But that one came up again and I was like, that’s what we need to talk about today. And you know, this, this loss of who we used to where like it’s really true. You almost go like through those, I think there’s 12 stages of grieving, 10 or 12 and you know, there’s anger, anger, denial, and then finally acceptance. And um, you know, it took me, I would say a good two and a half years to get to the acceptance phase.

And some people get there sooner and some people take longer and that’s okay. And if you’re a caregiver or a loved one, you know, you just, you, you have to take it day by day and you can’t get down the person. They’re not being lazy, they’re not being noncompliant. You know, it’s as much of a challenge as if it is for you. You know, you might be missing the old Bob or the old Susan and think about how much they’re missing the old Bob and the old Susan. We miss it just as much, if not more than you do. It’s, it’s even probably more frustrating for us because we want to be that person again, just as much as you want us to be that person again. So, you know, just take it slow, take it day by day, day by day, excuse me. And you know, we, we, we get through it.

We do and it gets a little bit easier. It never gets perfect, but it does get easier. So anyway, I hope that this has helped some of you, um, you know, leave a comment, share you guys these videos. I’ve been getting such amazing feedback and I’m doing these videos for you and I hope that you’re enjoying them and you know, feel free to share them far and wide because you just never know who you’re going to touch. You know, every 11 seconds someone in the United States suffers a traumatic brain injury. Those numbers are staggering, and the chances that you know someone, even if you don’t know that they’ve sustained a brain injury, um, there’s, there’s really good chances that you know, at least two or three people. So please feel free to share these far and wide, um, and keep commenting. I love seeing the comments. Um, it just makes me so happy knowing that these are having an impact. So thank you everyone so much and have a great day.