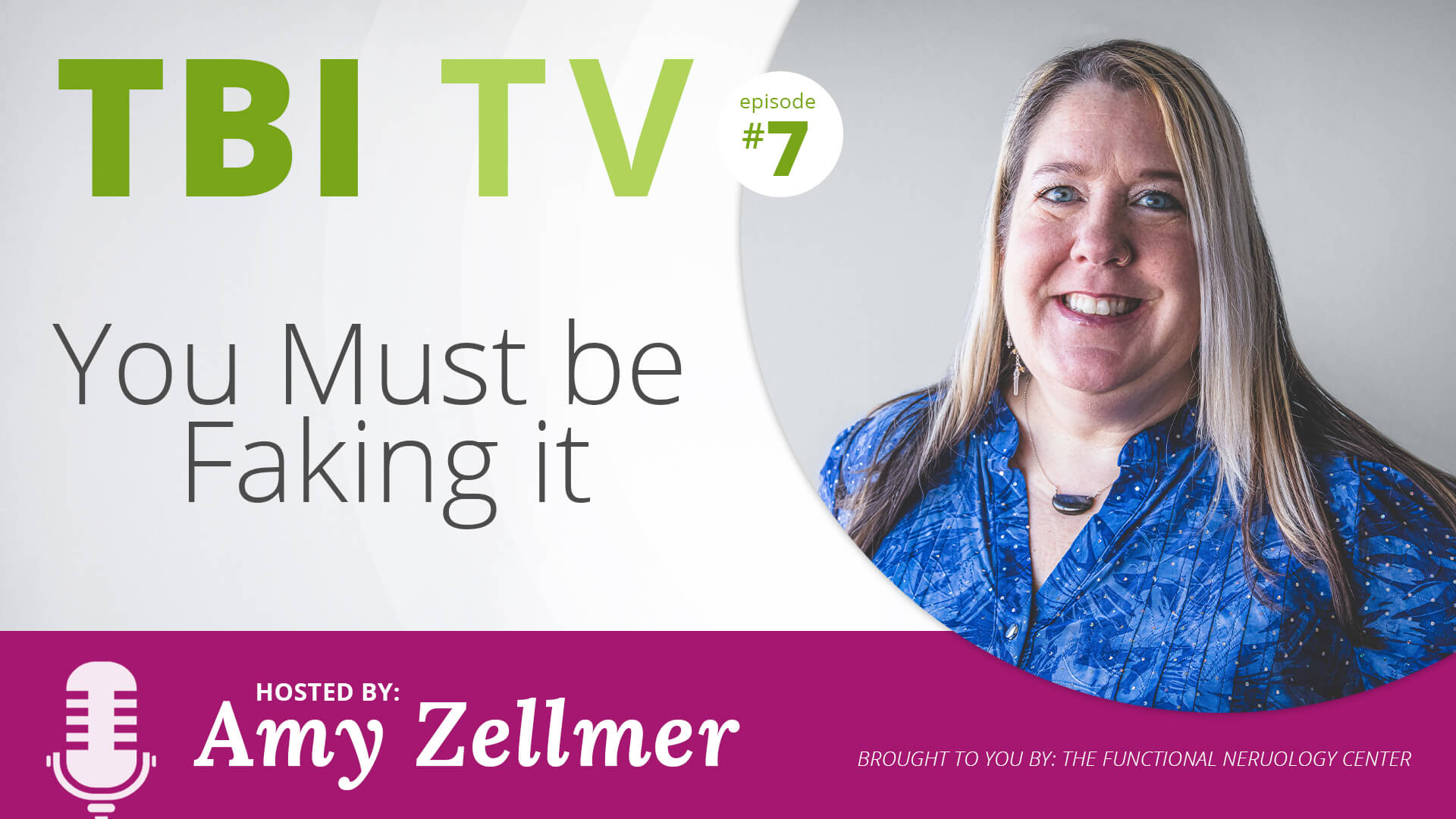 Hi everyone. Welcome to Traumatic Brain Injury (TBI) TB, brought to you by *Minnesota functional neurology (*MFNC is now The Functional Neurology Center.) and today I’m going to be talking about you must be faking it. So the past month and a half, I’ve been doing a ton of traveling and I was recently in Baltimore, Maryland giving a keynote and I received my evaluation forms from the conference and one of them jumped out to me as very interesting. Um, I had received lots of fives and some fours and then this particular evaluation form was all ones and the person listed themselves as a professional attending the conference and that they are a counselor. And, um, I’m gonna read you some of what she wrote on my evaluation form. She wrote, she is not an, she is not a quality speaker. She failed effort measures on her neuro psych exam. She is not a reliable source. She is the worst speaker I’ve ever seen at this conference.

And then at the bottom she wrote, she clearly has a sandwich, a form disorder. I’m probably pronouncing that wrong. Um, but it’s a fancy way of saying a psychosomatic disorder or that I’m faking it. So I thought that was really interesting. Um, so in my program, I share my journey, um, with my, with the neuro psych exam and how the neuro psych had told me how, you know, according to your age and your education level, you scored mostly average except for short term memory. You scored really low worst than a dementia patient. Oh, maybe I didn’t try hard enough. So that was coming from the neuro psych, uh, the neuropsychologist, um, when I have the neuro site done two and a half years ago now. So I share that story in my presentation when I give my keynote. And so apparently this counselor, um, found it appropriate to Mark me as an inadequate, unreliable speaker, um, and that I clearly must be faking it, that I don’t really have a Traumatic Brain Injury.

Um, so I found that super fascinating. It actually didn’t really like hurt my feelings at all. I mean, maybe like a tiny bit. Um, but it actually really opened up my eyes to how profound this is in the mental health community and providers in general. And it made me really sad for her patients that are having to endure. I mean, I hear this in my Facebook group all the time. The doctors don’t believe them, that neuropsychologist tell them they’re faking it, that they’re put on antidepressants and Ritalin and all these other things cause you know, they’re faking it. They can’t possibly have a Traumatic Brain Injury or you know, that it’s been six months, you, this possibly can’t still be your concussion. So I find it really fascinating that this person, um, that I, I clearly hit a nerve with this provider. Um, and I’m glad that she wrote what she did because it means that I’m doing my job.

Um, if I pissed her off that bad in my like 60 minute talk, um, you know, it got her thinking. I think it made her look in a mirror and you know, it probably won’t have an effect on how she practices, but it could. And you know, the fact that I ticked her off so bad with my talk, um, you know, I find it really interesting and especially given how much positive feedback I got from people after my talk, um, survivors, caregivers, providers, they all came up to me, um, thinking me, um, for being so real and raw with my talk and, um, to have this one person claimed to be a professional in the counseling field, um, get that ticked off and write that in any negative comments about me. Um, I found that to be really, really interesting and I’ve shared this with you all because I know that it comes up over and over and over again.

You know, I mean, when you have professionals telling you’re faking it, you have family or friends or coworkers, people are constantly telling you you’re faking it. You start to think that you actually might be a little bit crazy. And the reality is that it’s just so incredibly misunderstood and you know, that’s why I’m so passionate about doing what I do. That’s why I’m out there speaking. It’s why I’m writing pieces, um, on thrive. It’s why I do the Traumatic Brain Injury TBI T V it’s why I have my podcast. Um, you know, if I can affect, like in that talk, if just one provider in that room changed their mind about how they work with their patients, you know, it’s worth all the time and energy I put into it and it’s worth having to endure, um, negative feedback like I received. Um, so, you know, I just wanted to share this with you guys in hopes that, you know, no, you’re not alone.

SUm, you know, I’m four years out now. I do feel much, much better. I’m not 100% recovered. Um, you know, I just got back from spending, um, probably six weeks on the road out of the past eight weeks. And, you know, I, um, I’ve been doing a lot of sleeping and I’m really behind on a lot of my work, but that’s okay. You know, I give myself grace and that’s what we have to do. Um, we’re no longer the person we were before. I’m not able to, you know, quadruple, quadruple multitask like I used to be able to, but, you know, that’s okay. I give myself grace and I allow myself to have compassion for myself. Um, but just know that you’re not alone. If you’re told you’re faking it, you know, send them this video or send them my article. I wrote an article on it too. Um, I’m being accused of faking it or being told that you’re using your Traumatic Brain Injury as an excuse. That’s another one. That’ll be a whole other video. Um, so anyway, I hope you guys are enjoying my Traumatic Brain Injury TBI TV videos. Please hit the share button, put a light on it, write a comment. Let me know what you’re thinking of these. Um, I love hearing from you guys and I just, um, just keep doing what you’re doing. Be your own advocate and be an advocate for others around you. And I will see you guys next time.