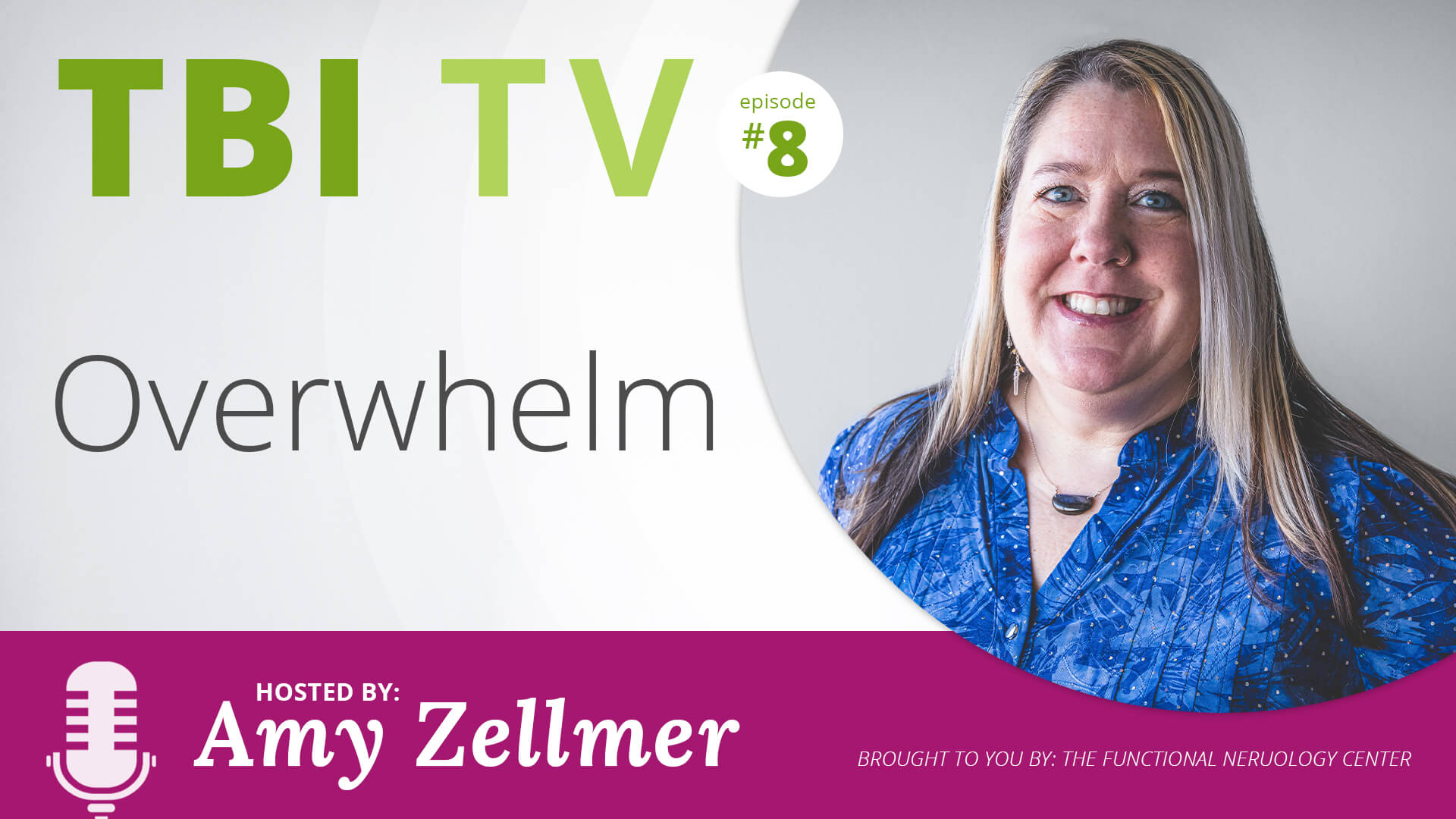 Hi everyone. Welcome to Traumatic Brain Injury (TBI) TB, brought to you by *Midwest functional neurology (*MFNC is now The Functional Neurology Center.) I am Amy Zomer and today we’re talking about overwhelm. Overwhelm is something that comes up all the time in my Facebook group and in my own life. Um, particularly the first two and a half years. I remember just everything was overwhelming, you know, not to mention overstimulation. So overstimulation itself as a whole or topic, um, which is a previous TBI TV topic, but overstimulation is overwhelming and then like everything’s overwhelming and then you know, you’ve, you throw apathy on top of that. The inability to get motivated is what apathy is. You throw apathy in on top of overwhelm and I mean it’s just this recipe for disaster. You never feel like you can do anything. You never feel like you can make a decision. Um, I know anytime someone would give me a decision like, what movie do you want to watch?

And it was just like, uh, I don’t know. I don’t know. Somebody make the decision and you know, it took me a while to even recognize that that was overwhelmed. And even now, it’ll still like having to make decisions can be really, really hard, you know, like, which mall do you want to go to? What time do you want to go? I mean, these are simple questions, simple choices, um, without a brain injury. But when you have a brain injury, the overwhelm can just be so incredibly frustrating and literally just kind of make you freeze in place and you’re not able to make a decision. And so, you know, my friends and family quickly realize that they just need to make the decision, you know, give me the option. Don’t, don’t take that choice away from me, but give me the option. And if I don’t seem to come up with an answer, then go ahead and make the decisions for me.

Cause that’s probably what I need. And if it’s not the right decision, you know, I’ll let you know, like, Oh no, that’s not what I want it to do. Okay. Um, I still might not be able to come up with the right choice, you know, in my own right choice. Um, but at least I can express that. No, that’s not what I want to do. So overwhelmed, you know, the thought of having to fold the laundry is overwhelming, you know, and that ties in with apathy too. So, you know, apathy and overwhelmed really kind of go hand in hand. Um, that ability, the inability to get motivated to do anything, the lack of motivation, um, which by the way is a real neurological disorder. It’s not, you know, it’s not you being lazy. Um, it’s, it’s a real actual disorder and unfortunately it often gets dismissed as depression and they’re very different things.

They, they, you know, they kind of marry each other and they have a lot of similarities and, and you know, I mean, most of us probably do have a touch of depression as well. Um, but it often gets overlooked and misdiagnosed as depression. And so it’s important to understand. And just because you have apathy doesn’t mean that you’re depressed. It doesn’t mean that you’re lazy. Um, it means that you, you literally don’t have the ability to get motivated to do something. And that’s why everything seems so dang overwhelming and overwhelm. I mean, it just can shut you down if you have too many steps on your to do list. Like if your to do list has more than three things on it, chances are you’re not going to get any of them done because you don’t know where to start. So, you know, I like to have a running to do list and then I will take the top two things that I want to get done that day and move them to a separate list.

Um, so that I don’t have to continually look at that big list. And I, um, you know, I’m better able to manage that now. But in the beginning, that was really, really, really hard. And so maybe you have someone else that can help you and if you’re a spouse or a loved one watching, you know, you can’t give your loved one a list of 10 things that you want them to do today while you’re at work. Cause it’s not going to happen. Chances are they’re not going to get any of them done. And then you’re going to come home and you’re going to be pissed off at them. And then it’s the cycle just continues. So you need to understand that overwhelm and apathy are real things. And so now maybe you do a 10 things you need them to do, but give them to ask them to do these two things and then maybe check in with them during the day.

And if they got those two things done, awesome. Now maybe give them one more thing to do and see if they can do it. Um, so it’s baby stops and like I said, sometimes you have to give them the exact steps to do. You know, if you ask them to put away the laundry, but it hasn’t been folded yet, it might be a challenge for them to even process to understand that has to get folded before it can get put away. And I know it seems so stupid to the lay person who does not have a brain injury. It’s like, how would you not know that it has to get folded before it gets put away? Our brains are broken. They don’t necessarily work logically. They don’t work the way that they used to work. And every single little thought process. If you have a couple of damaged pathways in there, think of how far it might have to reroute to get to where, I mean, the fact that we can even put it away without fully it is somewhat amazing.

So you might have to give more explicit instructions on what someone has to do. So if you’re noticing that with your loved one, like you asked them to do something and they technically do it, but they missed a step or two head of it, you have to maybe give them all the steps. And it’s not at all that they’re being lazy. It’s not that they’re stupid, it’s not that they’re slow, it’s, it’s that they have a brain injury and you know, it’s just as frustrating for us. So please don’t think that it’s not frustrating for us because I it, if it’s frustrating for you, it’s probably 10 more times, 10 times more frustrating for us. So please keep that in mind as well. So anyway, I hope that today’s topic of overwhelm was helpful for you. Please leave a comment, put a like on it. Share this on Facebook, Twitter, social media everywhere. Go ahead and give it a share because the more people that can see this, the the caregivers, the friends, the coworkers, this is important for coworkers to understand too. If your friend, if your brain is your friend, has come back into the workforce, it’s very important for coworkers and managers to understand. So please spread this video, share the love, give it a comment, give it a like, and thank you so much for watching. I appreciate all of you so very much. And I’ll see you next time.