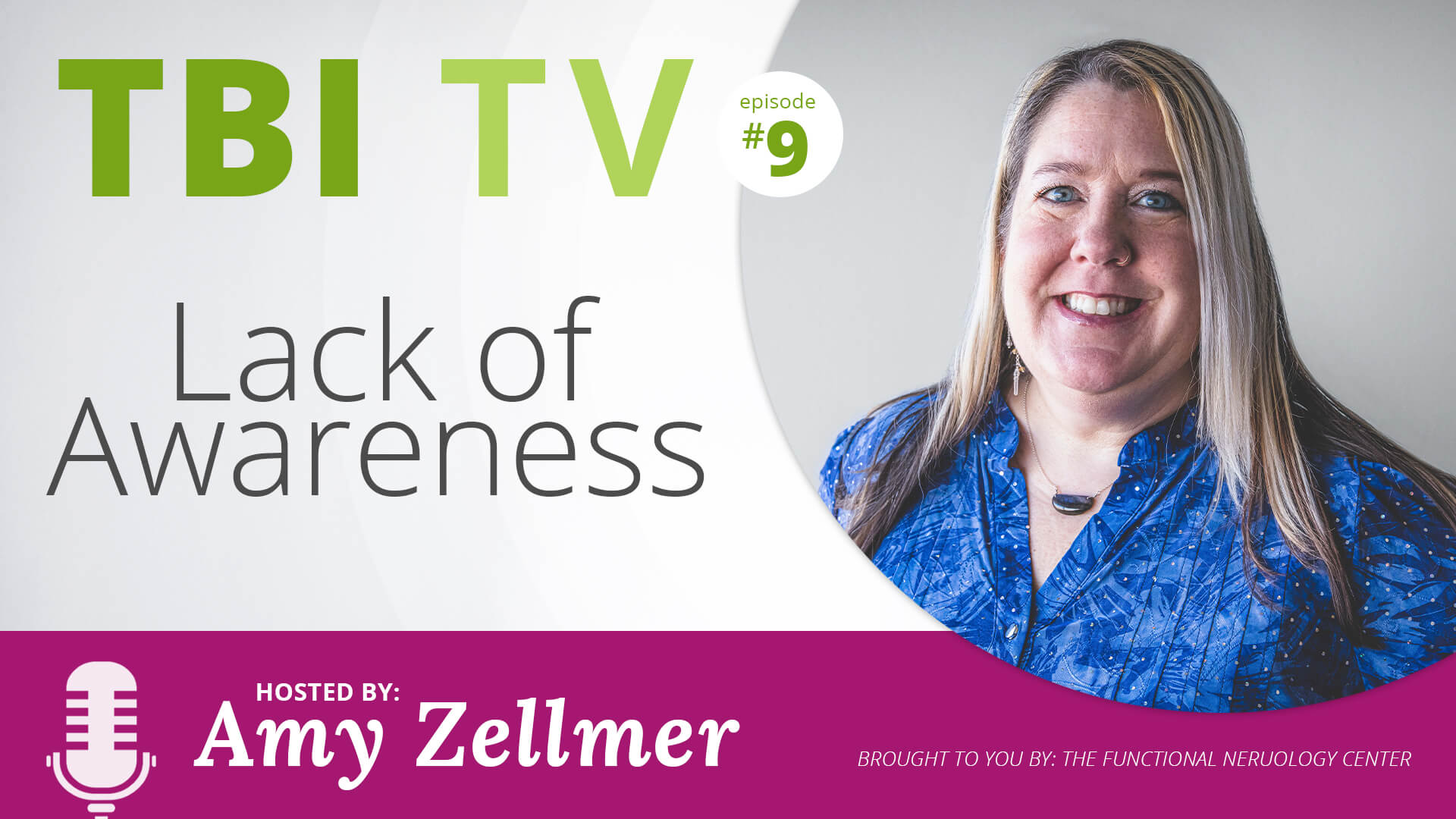 Hi everyone. Welcome to Traumatic Brain Injury (TBI) TB, brought to you by *Minnesota functional neurology (*MFNC is now The Functional Neurology Center.)  I am Amy Zelmer. And today we’re talking about lack of awareness. So what do I mean by lack of awareness? Well, kind of exactly what I’m saying. Um, I remember especially in that first 12 to 15 months after my accident, I had a very hard time reading things as in situations like I couldn’t read body signals, I couldn’t read facial cues. Um, I had a complete lack of awareness about things that we were supposed to do. So for example, I remember going to target and I’d walked around, target, did my shopping, came home and as I walk in my front door, there’s a mirror on the wall and I look in the mirror as I’m walking in and I like have food on my mouth. I had had like spaghetti or something for dinner and it just didn’t even occur to me one to like wipe my mouth off after I ate and two to like check to make sure I’d wiped my face off before I left the house.

Like, just that lack of awareness of things that, that like we would normally do. Um, so I remember coming home and being like, Oh my God, I just walked her on target for like an hour and a half with food on my face. I look like a fricking idiot, you know. Um, and then like talking to people, I remember my friend is, he, he’s very joke, C sarcastic. He likes to use humor. And he would say something to me and I’d be like, that’s really mean. And he’d be like, it was a joke. Like he, it was very clear to him that I, I couldn’t read, cause you know, we, we, we use facial cues and like we typically can, can distinguish sarcasm, um, from like actual conversation. Right. And so he learned real quickly that he had to say, you know, I’m joking or this is a joke or I’m kidding.

Cause I couldn’t read it and I couldn’t read situations. Um, there was just a lack of awareness and I think it’s just stemmed from, you know, I, I don’t know, I’m not a doctor. This is just like my opinion, but I think it stems from like, we go into this mode of overwhelm and you know, the whole change our theory and like, you know, it take, if you have $5 and your change jar and it a dollar just to brush your teeth in the morning and it takes $2 to take a shower and wash your hair, you know, you know, you keep using up your energy and the only way to replenish that energy is with a nap. So I feel like some of it stems from just like that overstimulation. We’ve overdone things. And so like our brain goes into conservation mode and uses the energy just to keep us upright and walking, um, and doesn’t like necessarily use that energy to read facial cues and expressions and, um, you know, uh, tasks such as making sure your face is clean.

Um, so, you know, that lack of awareness was really interesting. Sorry, my calendar’s popped up on my screen. Um, so that lack of awareness was really, really challenging. And like I said, it would be like a lack of, you know, being aware that, um, maybe I should put a jacket on before I go outside, you know, like it’s maybe 40 degrees outside. I might need to put a jacket on and then I’d get outside and be like, Oh, it was cold out while a while, you know, and I’d get in the car and go to the grocery store. Anyway. Um, so just that lack of awareness of our surroundings and I hear, um, I know someone told me that they, um, go for a walk every morning, you know, no matter sunshine, rain, snow, and um, their spouse has to help them, um, pick appropriate attire because they might put on shorts and t-shirt even though it’s snowing outside.

And I know sometimes friends and spouses and caregivers, they get frustrated. Um, you know, like you should know better put a jacket on. Why don’t you have a jacket? Oh my God, why didn’t you grab an umbrella? It’s pouring rain outside, you know, things like that that just, we just simply w I don’t know whether it’s that we don’t understand or we just don’t have the energy. I don’t quite understand that disconnect for us. Like, if it’s just simply a specific part of the brain that’s been damaged or, you know, I don’t know the answer to why it happens, but it happens. And you know, I know it happens to many of us and it’s something that I hear people talk about all the time, but they might not have a name for it. They might not know exactly what they’re talking about, but they’re talking about, you know, that lack of awareness and lack of awareness isn’t as a word that I just gave it.

I don’t know if it has an actual medical term or not. Um, but that, that lack of awareness, um, of reading situations and, you know, just like reading situations, whether it’s facial cues in a conversation or, you know, the weather outside or whatever it might be. So I, I hope that, um, this has helped some of you understand what you’re dealing with and maybe it’s helped a caregiver or a loved one, um, help understand what it is that you’re dealing with and why we do the really weird things we do sometimes. And, um, you know, it’s not something you can just get over or stop being that way or, you know, turn the off switch. It’s, it just, it has to take time to heal itself. And um, you know, I know, like I said in those early months after my injury, it was just a thing.

Like it didn’t matter if I was tired or anything. Um, I just always was that way. And now, um, it’s pretty good. Like I mostly, um, figured all that stuff out, but there still times if I’m tired or if I’m trying to multitask or whatever, that’s, that’s when those things still creep back in. So anyway, you can’t learn how to manage it. So it does get better. So anyway, thank you everyone for watching. Be sure to share this video comment, like give it some love and I hope that you guys are enjoying these video series and I will see you guys next time. Thanks everyone.